In my grandfather's time, Kutani Bitoen had many Potter's wheel craftsman in the workshop, and they made their living by making Kutani pottery patterns and fabrics.

At the end of the Showa era (1926-1989), when the bubble economy collapsed, the store was rebuilt to attract more customers. Kutani Bitoen also changed the design of the shop from the old Kutani ware image to a design that can be used for daily life from a housewife's perspective.

My father worked for a company in Tokyo, but left the company at the age of 58 to take over my grandfather's Kutani Bitoen.

One day, My mother received a call from Yoko Ono's office that she was coming to Yamashiro Onsen and they wanted me to attend her for three days.

The visitors were Yoko Ono, her younger brother, and Yoko's boyfriend from Poland.

Day 1
My mother picked up Yoko Ono and her group at Komatsu Airport and showed them around Naya Temple.
Yoko Ono loved Nayaji and she instantly made music there.
Afterwards, they went to Kutani Bitoen, where they painted and wrote on platters with the help of ceramic artist Hiroshi Kawashima. In the evening, we stayed at Kayotei in Yamanaka Onsen.

Day 2
They went to Hakusan Ichinomiya to see the Ushikubi pongee and Nakajima washi-paper, and had dinner at Kanazawa Yamano-o in the evening. My mother said the teahouse district was beautiful and looked like a photo. She went there several times after that, but she never saw a beautiful view like then ever since.

They went to Toyama to visit the graves of Yoko's ancestors.
Yoko Ono's great-grandfather was Zenjiro Yasuda, the founder of the Yasuda Zaibatsu, and he was from Toyama. So she asked her mother's friend, Mr. Nohara, a lumber dealer, to help her find the grave. When Yoko Ono visited the grave, she seemed very happy.

When she left, she gave us a platter with the word "Wa" (meaning: harmony, Japanese style, peace, soften) written on it and a plate and a iro-e (type of kutani-ware technique) plate. This platter remains at the Bitoen and is displayed as an important memento. (Not for sale).

Yoko Ono's office later contacted my mother and asked me to lend her the iro-e plate, which she did, but unfortunately they have not been returned yet. My mother says that she would appreciate it if someone related to Yoko Ono would return it to me if they have seen it. Yoko Ono is one year older than my mother and was born in 1933. 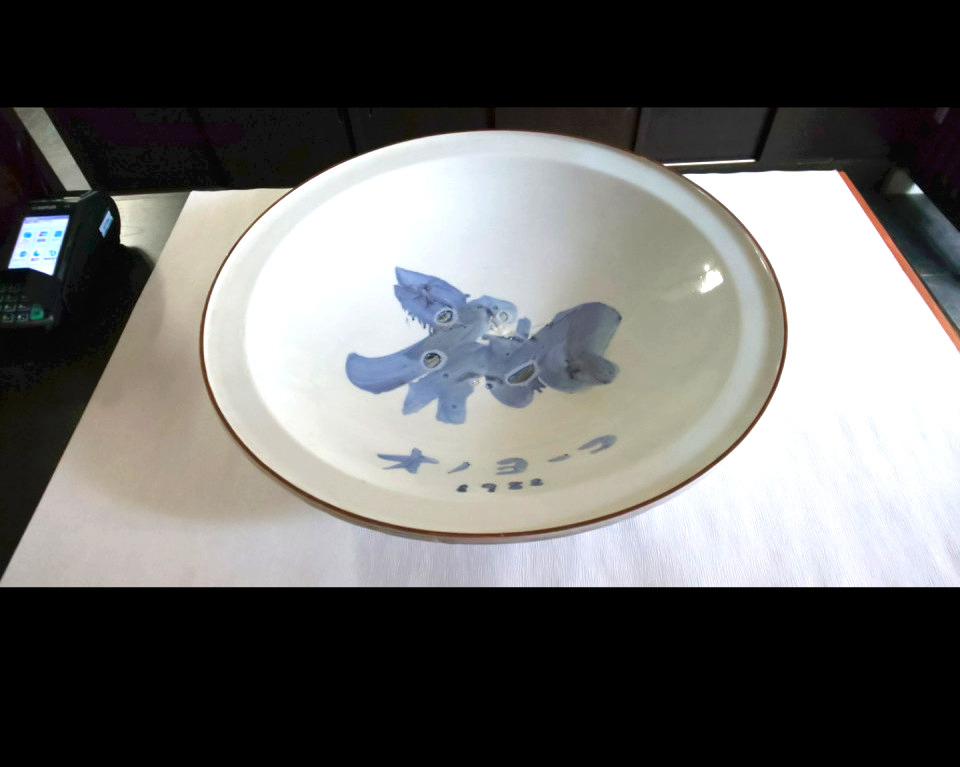